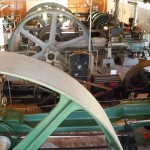 The New England Wireless and Steam Museum is an electrical and mechanical engineering museum emphasizing the beginnings of radio and steam power. The museum honors engineers who achieved greatness and served the public good by analyzing and solving tough engineering problems. The museum is both archival and educational.

This museum preserves the original Massie coastal wireless station, which was moved from Point Judith, Rhode Island. This station, built in 1907 to communicate with marine shipping, is the oldest surviving, originally equipped wireless station anywhere. It symbolizes the very start of the electronics industry–a Plymouth Rock of the radio, TV, cellphone, satcom, Internet, computer, CATscan and all the other marvelous creations of electrical engineering. The significance of the Massie station is enormous.

The museum displays rare early radio and steam apparatus–much in working order. Keeping these things working and demonstrating them is part of our mission.

Just a few of the remarkable things here

Take the tour of the museum: https://www.youtube.com/watch?v=aVIZkYaAXS0

Visit the museum’s YouTube Channel to explore their extensive video collection. There are too many to mention favorites!  https://www.youtube.com/channel/UCp7lG7F6H1xO2bB-SW4oQsg/videos

Visit the museum’s website for additional information and videos https://newsm.org/